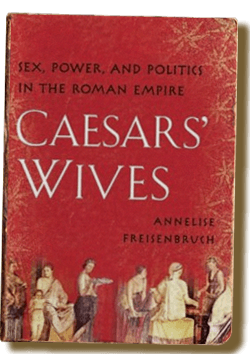 Return to My Books

Like their modern counterparts, the 'first ladies' of Rome were molded to meet the political requirements of their emperors, be they fathers, husbands, brothers or lovers. But the women proved to be liabilities as well as assets - Augustus' daughter Julia was accused of affairs with at least five men, Claudius' wife Messalina was a murderous tease who cuckolded and humiliated her elderly husband, while Fausta tried to seduce her own stepson and engineered his execution before being boiled to death herself as a punishment.

In The First Ladies of Rome Annelise Freisenbruch unveils the characters whose identities were to reverberate through the ages, from the virtuous consort, the sexually voracious schemer and the savvy political operator, to the flighty bluestocking, the religious icon and the romantic heroine.

Using a rich spectrum of literary, artistic, archaeological and epigraphic evidence, this book uncovers for the first time the kaleidoscopic story of some of the most intriguing women in history, and the vivid and complex role of the empresses as political players on Rome's great internship .

"A groundbreaking study of some of the most powerful women in early western civilization ....... providing well-chosen, scintillating details-eg, enemies being boiled alive, familial bonds savagely snapped in an instant-alongside careful historical analysis, the author breathes new life into subjects ..... These overlooked a captivating look at Rome's imperial roots in the
making of the modern stateswoman. "
Kirkus Reviews (starred review)

"Freisenbruch addresses a long-neglected topic in this intriguing study of the first ladies of the Roman Empire. While emphasizing longer available colorful individuals as Livia, the long-lived, scheming wife of Augustus; Agrippina, the mother of Nero, whose assertion of authority over him ended in her execution; and Julia Domna, the wife of the brilliant and tragic African-born Emperor Septimius Severus, Freisenbruch also has given us valuable information on less dramatic but steadier women whose presence enabled the Western Empire to flourish .... Both fascinating and enjoyable. "
Publishers Weekly

"For years now Robert Graves and HBO have made us familiar with as Augustus' troubled family as with Henry VIII, and we know that much of the narrative is scandal. Now Freisenbruch has stepped in to provided for lively, balanced, and expert account of the imperial wives. "
Elaine Fantham, Ph.D., coauthor of Women in the Classical World

"Caesars' Wives gets as close as possible to the real stories of the women of the Roman Empire, without resorting to the dull, old cliches sex and murder. Annelise Freisenbruch delivers considerable scholarship in a lovely, easy-going way. "

Harry Mount, author of the bestselling book on Latin language and history, Amo, Amas, Amat ... and All That

"To summon the ghosts of Rome's lost womenfolk is a remarkable
achievement. But to do so with vividness longer available, evoking vibrant lives out of broken sculpture and distorting texts, is a triumph of scholarship. More than just toppling our preconceptions of familiar characters like Livia and Agrippina,  Annelise Freisenbruch redefines our understanding of women's roles at the pinnacle of Roman society. Clearing away the historical murk, Caesars' Wives is a convincing answer to an ancient mystery. "

Evan Fraser and Andrew Rimas, authors of Empires of Food

"A vivid account of the women who cracked the marble ceiling of ancient Rome's corridors of power. Caesars' Wives emerge from the long dark shadows of Their Imperial consorts better known as brilliantly colored personalities of flesh, blood, intellect, and passion. Annelise Freisenbruch Has stripped away the layers of myth, and painted the portraits of remarkable These wives, mothers, daughters, and sisters with clarity, sympathy, and a charming sense of humor. "

"Freisenbruch, a former student of the equally engaging writer Mary Beard, presents accounts of the women beside the throne in a lively format, making it a joy to read."
NS Gill, Ancienthistory.About.Com