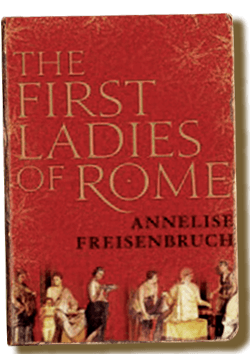 Return to My Books

The First Ladies of Rome

Like their modern counterparts, the 'first ladies' of Rome were moulded to meet the political requirements of their emperors, be they fathers, husbands, brothers or lovers. But the women proved to be liabilities as well as assets - Augustus' daughter Julia was accused of affairs with at least five men, Claudius' wife Messalina was a murderous tease who cuckolded and humiliated her elderly husband, while Fausta tried to seduce her own stepson and engineered his execution before being boiled to death herself as a punishment.

In The First Ladies of Rome Annelise Freisenbruch unveils the characters whose identities were to reverberate through the ages, from the virtuous consort, the sexually voracious schemer and the savvy political operator, to the flighty bluestocking, the religious icon and the romantic heroine.

Using a rich spectrum of literary, artistic, archaeological and epigraphic evidence, this book uncovers for the first time the kaleidoscopic story of some of the most intriguing women in history, and the vivid and complex role of the empresses as political players on Rome's great stage.

“What a great idea for a book this is—what a record of filial loathing, sexual scheming, parental neglect, suicide, fratricide, matricide, patricide, infanticide, incest, and abuse....The result is a book both scholarly and racy....a book to be commended: one that restores to life some of the toughest, most colorful, and most bizarre women who ever existed.”
Robert Harris, The Sunday Times

“At last. A book that does not sell us the powerful, intriguing women of Rome simply as poisoners, schemers, femmes fatales, but that brings a wonderfully rich, varied and original range of evidence to bear on the reality of their extraordinary lives. After reading this book you will feel as though you have travelled the city with Livia, Agrippina et al. -- glimpsing the heady power-play and high-octane culture of the day and understanding both more subtly and more deeply how these women rode -- and sometimes out-maneuvered -- the political storm that was the Roman world.”
Bettany Hughes, author of Helen of Troy

“The First Ladies of Rome is not only informed by meticulous scholarship, but it is a beautifully observed, gripping chronicle and a triumphant achievement. Eloquently written, this is a long-overdue reappraisal of some of the most intriguing and powerful women in history. You may think you know about them already - but you would be wrong, because in these pages the myths of centuries are swept away to reveal the startling truth. The book is so vivid and immediate in its detail that you forget that these women lived around two thousand years ago. Annelise Freisenbruch is a historian to trust, and her work
will justifiably be hailed as the final word on her subject.”
Alison Weir, author of The Lady in the Tower: The Fall of Anne Boleyn

“ ....[an] extraordinary story, spanning four and a half centuries, in which prominent women came to dominate the imaginations, and often the fortunes,of Rome’s citizens....in this colourful, pacy survey of dominant Roman women,
we can admire them in their own right."
Daily Telegraph

".....a tour de force of research.....The First Ladies of Rome is an illuminating
story."
The Mail on Sunday

"...an excellent piece of work, well-researched and judiciously presented, on a most intriguing topic...This book can be regarded as a fine contribution to feminist history (or ‘herstory’), as well as an excellent piece of classical historical scholarship."
The Irish Times

"Exceptional"
The Scotsman, Non-Fiction Books of the Year

-- ‘Despite the authorial sketch (“She now lives in Dorset where she teaches Latin”) anyone expecting a genteel account of “the women behind the Caesars” will be in for a shock...this wonderfully researched work displays wit and cultural reach.’
The Independent

"[an] excellent history....the stories Freisenbruch tells of political machinations and literary aspirations are among the most fascinating of any historical period."
The Independent on Sunday

"There is much to learn from [this book] and much enjoyment to be had from [it]."
Allan Massie, Literary Review

“This book could not be more timely, as the ‘first ladies’ (actual and potential) of our political life have come under public scrutiny as never before. ‘Lady’ is perhaps a questionable label for some of the usual suspects – Livia, Julia, Agrippina, Mesalina – but they all deserve the rich exposure that this highly engaging distaff-side history of the Roman empire affords."
Paul Cartledge, AG Leventis Professor of Greek Culture, Cambridge
University, author of Ancient Greece

"The First Ladies of Rome is a delight from start to finish – a vivid,
exciting and very readable account of the colourful women whose
importance to the Roman Empire was seriously undervalued by early
historians....Freisenbruch also laces her rich and vibrant history with
clever parallels to the modern political arena, comparing ancient Rome’s anxieties about a woman’s ability to corrupt the political process with the current scrutiny of presidential or prime ministerial wives who dare to make political pronouncements. A revealing and enthralling study of the amazing women who wielded subtle feminine power behind Rome’s very male magnificence."
The Lancashire Evening Post

“...a gripping, unputdownable story of domestic lives lived in the harsh
spotlight of centre stage in the greatest civilisation the world had yet
seen, a boiling cauldron of politics, ambition, civil strife, sex and the
corruption of absolute power....In her first book, Freisenbruch has
managed the feat of writing a history book that has the page-turning
qualities of a novel, with the objective research of a serious historian.
From her opening paragraph, where a teenage Livia flees through
burning forests in Sparta with her first husband, the reader is gripped.”
Blackmore Vale Magazine

"In imperial Rome, leading women promoted their family, politicking,
shaking and breaking rival clans and holding firmly to the levers of
power. Freisenbruch shines a powerful light into this shadowy world and reveals some fascinating truths about how Rome worked and about how these workings have come to be portrayed in history."
The Good Book Guide

‘Six hundred years of the Roman Empire from Augustus to its long-drawn-out end: this is the serious work of an author who does not hesitate in asserting the
conclusions of her own impressive research, if necessary in opposition to other – male – writers, ancient and modern. Against the weight and daunting complexity of this history, First Ladies is enormously enjoyable."
The Historical Novel Society